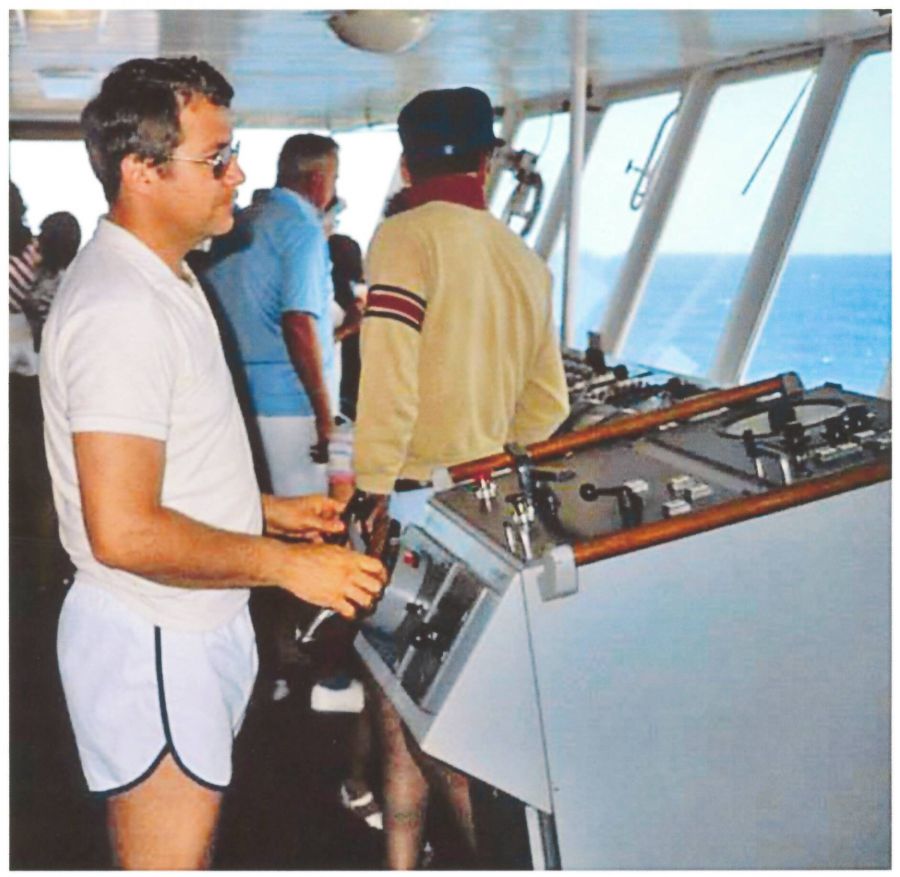 Ted was born in Minneapolis, Minnesota on May 11, 1946 to Theodore W. Klohs Jr. and Marion Mae Klohs. Marion recounts having to plow through drifts of snow that day to get to the hospital. An auspicious beginning for a man that appreciated irony.

Ted graduated from Anoka High School along with his wife and 700 other true baby boomers in 1964. There he lettered in 3 sports each year, Football, Wrestling and Track. Ted was the natural athlete. He could pick up a bat and hit a homer, slice through tennis balls, skate, run circles around you, play racketball, he bowled a 289, and well, he played at golf, sometimes surprisingly good, but sometimes not. Ted wrestled for and graduated from the University of Minnesota with a degree in business.

After 6 years of prenuptials, he proposed to Linda and they were married, July 3, 1968. As neither Linda, nor he had ever taken a vacation, money was saved for the trip of a lifetime, their honeymoon. A week in New York City, and 4 weeks in Europe in the summer of 1968 turned out to be quite an eye opener for them both. Linda claimed that she would never again leave the state of Minnesota after seeing what the "real" world looked like, but Ted just smiled.

Ted was a man of few words, but he made them count and for many years he was known as the quipster- a better description would be a groan-producer. An example: When going by a cemetery, he would inevitably say: "You know, people are just dyin' to get in there."

Ted did smile when Linda said "no more travel" as Ted and Linda's life together was embedded with travel until Ted could travel no more, the last two years of his life. Before that, he traveled to Europe over 20 times, France, England, Ireland, Scotland, Hungary, Sweden, Denmark, Russia, Finland, Estonia, Austria - and to Mexico as many or more times. He and Linda played spin the Globe with Nancy Wrobel on various occasions. He and the family went to Disney World on umpteen trips. He took on South America (The Amazon, Cartegena, Medillin), Middle America, Canada, Alaska, Africa (Kenya and Egypt), and every state of the US, including Wisconsin. Travel was the central theme of his life with his family.

Ted was a plant superintendent for more than one paper box company. He was very good at his job. It was constant barrage of problems to solve. Ted was so good at this highly stressful job because his other moniker was Mr. Fix-it and all appreciated his many skills. At Ted's 40th birthday party, the discussion turned to the subject of with whom we each would like to be stranded on a desert island. Linda chose Tom Selleck, some chose Christie Brinkley, or even Georges Lucas. But when it came to Steve Schmidt's he said. "I would choose no one but Ted." Then someone else chimed in, maybe Jeff Hicken or Ed Davenport and they said, "Me, too!"

The other central theme for Ted was family. We had 20 years of Monday Night Dinner with the entire family. He loved his children. And when the grandchildren came, they sought out Bapa's lap. He may have been in pain, but he never showed that to his grandchildren. He never wanted to miss any of their plays, concerts, and dance recitals. They were the apples of his eyes and he was proud of each of them and their many accomplishments.

Steve and Ted were often together, with fishing being the top of their list. But one time, when they were downtown, Minneapolis, with a group of men, Steve's suburban up and died on the street. All aboard got out and simply looked at the dead vehicle. All but Ted. He opened the hood, analyzed the problem. He went over to the gutter area and picked up something off the street. He attached it to something in engine area and said "start her up". Steve turned the key, she hummed like new, all popped back in and off they went, amazed again with Mr. Fix-it's talents.

The Tree: When our daughter would be attacked by night terrors and was sure she was going to die, a meeting point was chosen, so that all would know where to go if she or he did die to meet up with the family. Ange would say, "Okay, I know that we are meeting at the tree."

"Yeah", I would say, "the ugly apple tree outside of Grandma Klohs' back door."

One could watch the calming effect that this planned place and encounter had on her. She could then fall back to sleep, comforted, and not be afraid.

When Ted decided to have his LVAD turned off, I reminded him of our family's planned location for meeting.

I said, "Ted, you remember where you are going and what you are doing when you close your eyes the final time. Remember it is the ugly apple tree where we meet. When you close your eyes, you may have to work to get there, but you will only wait a bit and I will be there, too. I will get season tickets to the deep sea fishing launch, you know Captain Tony's? We just have to drive down and we'll be there. We can go through Nashville, Atlanta, and even Mississippi, take our time and appreciated the warm sun on our faces. You can catch the most fish, but I get to catch the biggest." He smiled.

You could see the calm had taken over his body. He was ready to go there.

I continued. "Now, I know that Steve will want to join us, but he can't catch the most fish or the biggest." Ted smiled.

So, Ted is a pragmatist and a problem solver and I know he didn't bother with the tree, he just went fishing with Steve. But I also know he will meet me there when the time comes. And Ted will smile and so will I.

What an absolutely beautiful obituary.
I was a year behind Ted at Anoka, but we rode the same (5A) school bus.
I remember Ted as being just an awfully nice guy.

The services for Theodore have not yet been added. Please sign up below to be notified when the services are ready.

Get Notified When a Service is Added

The attached photos are added to the memorial of Theodore W. "Ted" Klohs, III to help share their legacy.

Thank you for sharing your memory of Theodore